Last week, Paula, one of my patients asked a question about “herd immunity” and Covid19. Many of you may have questions about this concept, which has become controversial and is often misunderstood.  So, I thought it would be a good idea to talk about it in some detail.

Unfortunately, now well into the fall season, the predictions of many of the experts seem to be coming true. With colder weather, people spending more time indoors, colleges and schools re-opening, businesses trying to get back on track, and “Covid fatigue” setting in for many of us, there has been an increase in Covid19 infections. Record numbers of cases are being reported daily and the problem is severe in the midwestern US. Even in New York and the northeastern states, where the problem seemed under control for most of the summer, there are rising cases of coronavirus. Europe has seen a huge increase in Covid19 throughout the continent and the UK is now in lockdown. The good news is that the death rates seem to remain fairly low in relation to the total number of infections, as the health care system is gaining expertise in managing serious Covid19 illness, and testing and contact tracing efforts have been improving which helps to contain large outbreaks.

The bottom line is: this virus isn’t going anywhere. It is here and the pandemic persists, regardless of the weather and despite our efforts thus far. We wear masks, wash hands, and keep social distance to reduce the spread of the virus. That helps – a lot – but these efforts cannot eliminate the coronavirus.

How do we overcome it? There are several ways that the coronavirus can “go away”: mutation to a benign virus, finding a safe treatment or cure, complete containment, and herd immunity. 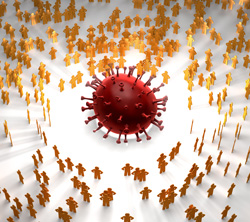 Many hoped that the coronavirus would mutate and fade away or perhaps turn into a more benign illness, like the common cold. This is essentially what happened with the 1919 pandemic flu, which killed millions before it mutated into a more common form of the flu virus. Even though like most viruses, spontaneous mutations are common, so far, it has not resulted in a real change in virulence. The good thing in this regard is that the outer envelope and surface proteins have not significantly mutated, providing for a good opportunity to develop an effective vaccine. Indeed, it appears that at least 2 vaccines should be approved before the year’s end. There is a good chance that the vaccines will roll out in early 2021 and be widely available by the Spring.

An effective treatment, such as an antiviral antibiotic, would be great, but thus far, there is no such treatment and there is nothing on the horizon as it appears right now. (The treatments we have discussed for hospitalized patients, like those that President Trump received are for those with moderate to severe disease and are effective to prevent catastrophic Covid19 illness, but do not constitute a cure by any means). Unlike antibiotics to fight bacterial or fungal infections, we simply do not have very effective agents to combat viral infections.

Containment means that the virus is limited to a group of affected individuals who are quarantined from all others. That way, the virus has no more susceptible hosts to infect and it dies off or is dramatically reduced in number. The opportunity to achieve this has passed. Perhaps this could have been done when the Coronavirus first emerged in China last year, but once it spread worldwide, we have a pandemic on our hands, and containment is limited only to restricting local outbreaks. The Ebola virus outbreak in 2015-16 in West Africa was “defeated” by containment. Though even more deadly than Covid19 (90% of those infected, die!), it was much less contagious and was managed by effective containment measures. Though there are still some cases that emerge, ongoing containment efforts have prevented significant outbreaks.

That leaves “herd immunity” as the remaining means of controlling and eradicating Covid19 disease. Though a well-established concept widely used by epidemiologists, immunologists, virologists, and infectious disease physicians, it has taken on a relatively pejorative meaning in the current political climate in which we live today. There are a few reasons for this. For one, people don’t like to be talked about with reference to a herd; that is for animals! And we often use the term “herd mentality” in a negative sense, meaning a common and perhaps primitive view of things, or beliefs that are adopted by members of a group to which they belong, in contrast to individual or free-thinking.

Additionally, there has been considerable controversy regarding those who have advocated herd immunity in terms of dealing with Covid19 by means of allowing the virus to simply spread throughout the population until almost everyone (except those who are highly vulnerable) has been exposed and thus become immune to the virus. This is similar to the approach of Sweden, which took a much different approach to the Covid19 pandemic than most countries and contrasted with the WHO and CDC recommendations. A similar approach has also been advocated by scientists participating in the Great Barrington Declaration. It has led to quite a bit of controversy and it has actually politicized the concept of herd immunity*,  leading many people to misunderstand the concept and associate it with simply allowing everyone to become infected in order to overcome the pandemic.

Actually, herd immunity is an important concept which applies to any serious viral infection or pandemic. A better and more accurate term than herd immunity is actually “herd protection”. It simply means that when most of the population is immune to a particular virus, then the virus no longer has the ability to find a susceptible host and therefore goes away completely or at least practically. This is usually achieved via vaccination programs. Smallpox used to kill millions of people and has been eradicated via vaccination, in which herd immunity developed and the virus died off. This is true of many once common viruses, like measles, rubella, and polio.

Following vaccination, the virus may persist in very small numbers but is not threatening, since most members of the population are immune and cannot become infected. Measles, which is an extremely contagious virus has been effectively contained by vaccination programs, but when populations are not immune, generally by not complying with vaccination recommendations, outbreaks emerge. This is the case with the 2019 outbreak in which most members of a close community were not vaccinated. This led to a loss of herd immunity and large numbers of people became infected.

In order to achieve herd immunity, a certain percentage of the population must be immune. That percentage varies, depending upon the degree of contagiousness of the particular virus. The Coronavirus responsible for Covid 19 is as we know, quite contagious—a bit more than the flu, but not as much as measles.  Epidemiologists calculate the percentage of immune individuals required to establish herd immunity (protection) based upon the “basic protection number” R0, which means the number of people, on average, that an infected person spreads to others in a susceptible population. The higher the R0, the higher the percentage of immune individuals required to achieve herd immunity. Measles, for example, with an R0 of about 12-18 require that 92-94% of the population be immune in order to protect the “herd”. The seasonal flu has an R0 of about 1.3. It is estimated that the Coronavirus has an R0 of 2-2.5. It has been a bit hard to tell because so many of those with Covid19 are asymptomatic and the measures we use to avoid infection (masks and social distancing have certainly not been common with regard to fighting influenza or any other virus until now!)change the calculations,  but the estimates suggest that in order to achieve herd immunity for Covid19, about 65% of the populations must be immune.

That means that once 60-70% of the population is immune to Covid19, then this scourge will go away!

How do we achieve that goal?  Vaccination.

It is, in my view, ridiculous to wait until 65% of the population achieves immune status by becoming infected. If 2/3 of the world population has to be infected before we are done with this thing, then millions and millions will have died or become permanently disabled before we get there. Moreover, we do not even know how long immunity lasts after one recovers from a Covid19 infection. Some experts estimate that such immunity lasts 6 months, others figure a year or more, but we really do not know. So, even if we allowed for and waited for virtually all of us to contract Covid19 in order to get to herd immunity, it might now even last very long!

Vaccination generally leads to higher antibody levels and more effective immunity than actual infection and it is a much better way to get to the goal of herd immunity. We do not know if the coming vaccines will provide long-lasting immunity or whether booster immunizations will be required. (When the vaccines do come out, I will be writing about them in detail). Most likely, the vaccines initially available to us will be improved upon and optimized over a period of time. But it is surely possible to get 2/3 or more of the population vaccinated with an effective immunization program over the next year or two and thus defeat this awful virus that has affected every single person on earth in a myriad of ways.

Until next time, stay safe!

Reach out to my office if you’d like to schedule an appointment.

*Actually, much of the controversy relates also to the idea of lockdowns and the economic impact of severe measures to manage viral spread, which is unrelated to our purpose here

Plan your visit to our Clinic